Human Rights, we can be free only if all are

may 17, 2014 – Santa Teresa di Gallura, meeting with students of the ‘Institute PFM Magnon

To swim in rough sea, force 3 gale, while crossing the Strait of Bonifacio between Corsica and Sardinia. To face a very strong wind about 25/35 knots from north-east, and about 5 feets high waves and a minimum 12 degrees Celsius water temperature. Possibly, people have thought I am so crazy. Actually, that had not been my first time I met that kind of weather condition. I already had many experience in similar very difficult condition, as I did when in Lake Kivu, in Congo (with a high risk for very dangerous gas fumes on the water surface) or in New Zealand, where I reached my goal already suffering the hypothermia caused by too cold water temperature. Actually, while I am swimming, I follow a so very strong and clear view in my mind: that is my way and my instrument to fight for Disability Rights. 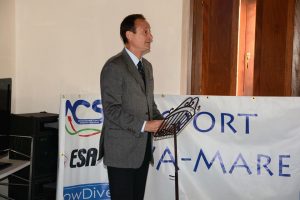 There were many people along with me, on that day, and they followed my adventures in Santa Teresa di Gallura, which is a small and beautiful sea-side village. Since a long time ago, I have it in my heart because of the beauty of the landscape and the kindness of the people living there. I just want to mention here Gianni Nicolai (nicknamed “Pecchia”) Captain onboard the “AJOOO!” boat, Paolo Arca Sedda (onboard assistant), Dr. Moena Rizzoli, Giacomo Vincentelli and Paolo Molino (cameramen), Miho Tsuruoka (photographer), my friends Maurizio Bagliani from Rome, friends and also my friends Mario Romor and Roberto Porcu, and finally my extraordinary old friend, Nardino. 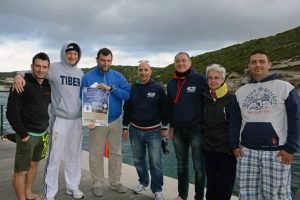 We started from Capo Pertusano at 9:12 am in very difficult sea weather condition. Our boat Ajooo! wasn’t able to go to straight to Santa Teresa Gallura, disturbed by big waves and countered by strong currents. From surface, I could see the boat only at a time, due to the high waves. One hour later, my impression was I had been swimming just for no longer some a few hundreds meter. Actually, currents and waves had diverted us all from the route we had stated. 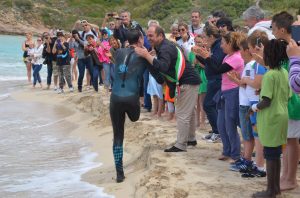 I reached Rena Bianca-White Sand- Beach in Santa Teresa di Gallura after I had been swimming for about 20 km, instead of the 15 km we planned. At 14:30 pm, that is after a 5 hours 18 minutes long troubles for both me and the crew onboard Ajooo! Once I reached the beach, every troubles of mine vanished in a sudden, thank the crowd of so many people welcoming me, led by Stefano Pisciottu, the Major of Santa Teresa di Gallura.

I would like to thank teachers from the P.F.M. Magnon Institute, who had enabled me to meet their so marvelous students, available to listen to me and to share the message of democracy I brought to them. The Nuraghe “Lu Brandali” that has hosted a important press conference.

Many thanks also to the Town Council of Bonifacio and Santa Teresa Gallura and to the Regional Council of Sardinia, who have supported this event. I would like to say “thank you” to the organizers of the event “Sport d’Amare”: ACSI-Associazione Centri Sportivi Italiani (Italian Sporting Clubs Association), Slowdive and ESA Worldwide who trusted in my project “Swimming the seas over the Globe, for a world without barriers and frontiers”, in Sardinia. 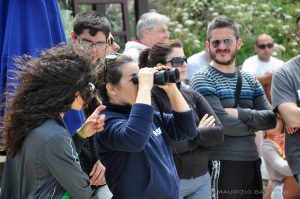 A very special mention to Freddy Cardi, his wife Serenella Pes and son Gabriel, for the lovely friendship they demonstrated, by hosting me in their Bed&Breakfast.

Selex ES, the Company I work along have supported me, as well, and I am very grateful for that.

And, “dulcis in fundo”, “Circolo Canottieri Aniene” sporting club, and its President Giovanni Malagò, have greeted me with enthusiasm and friendship. They continue to trust in such a project, I am to build over the next years.

Thank you, I’ll see you in New York
Salvatore Cimmino